The biodiversity in the soil consists of microflora, such as bacteria and fungi and fauna, such as nematodes, mites and worms. The organisms in the soil food web provide the nutrients, decompose organic matter and contribute to a good soil structure. Soil biodiversity provides important ecosystem services.

Soil life depends on the soil type and the soil use. For example the soil in pasture contains plenty of different worms, whilst a soil that was used to cultivate corn for years on end will have virtually none. Young chalky clay soil contains many bacteria that decompose organic matter quickly and easily. In acidic sandy forest soils, fungi convert organic matter into humus.

In some places in the soil there are high concentrations of organisms, also known as biological hotspots. They are near the roots, where many organisms are active due to the excreted root juices and dying off of root parts. Food and oxygen-rich worm tunnels, just below the sods and where it has been fertilised, are places with a high concentration of soil life.

Soil organisms form part of a food chain - the soil food web. Fungi and bacteria are at the bottom of the chain. They eat dead and/or live plant material. Soil organisms, such as protozoa, springtails, mites, nematodes, feed on fungi and/or bacteria. Pot worms and earthworms also eat dead plant remnants. At the top of the soil food web are predators, such as nematodes, springtails and mites that eat other types of nematodes, springtails and mites. Every group of organisms has a different function in the soil. 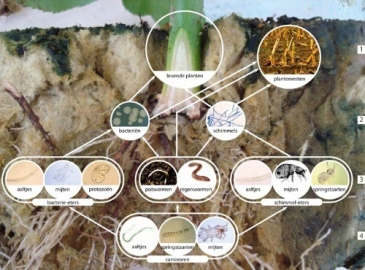 If we talk about making the soil healthy, we often refer to dealing with diseases or plagues. It is important to realise that this targets all bacteria and fungi, even though just 2% to 5% are harmful variants. The remaining 95% is actually useful and contributes to balance and recovery.

Fungi form threads with which they grow through soil particles and in doing so they contribute to sticking together soil particles, to aggregates formation. In contrast to bacteria, fungi are able to decompose organic matter that is rich in carbon. Mycorrhizal fungi live in symbiosis with plant roots. The plant provides energy to the fungus and in exchange the fungus provides nutrients and water to the plant. By using mycorrhizal fungi, plants are able to use a much larger oil volume for absorbing phosphate for example. Mycorrhiza also contribute to disease resistance. In poor soils in particular plants and mycorrhiza benefit from their cooperation.

With their large numbers, bacteria account for the largest biomass in soil life in many soils. Bacteria feed themselves on easy to decompose organic matter. They are then prey for a number of predators that are higher up in the soil food web. This process fixes and releases nutrients.

Worms eat bacteria and make an enormous contribution to the soil structure. With their activities, eating and moving, worms provide a wealth of nutrients to the plant. Crucial to keep the engine (the soil) running. Do we realise their contribution? This video shows the role of earthworms and other soil animals.

Earthworms have a positive effect on crop yield; they increase the yield by an average of 25%, particularly when you use limited nitrogen fertilisation. Earthworms stimulate crop growth and bacteria and fungi because they decompose organic matter.

Earthworms are subdivided into three functional groups - subsoil and topsoil dwellers (endogeic), litter dwellers (epigeic) and vertical burrowers (anecic). The litter dwellers live close to the surface and convert plant remnants and manure, but make little or no contribution to soil structure. The vertical burrowers dig permanent vertical tunnels in the topsoil and contribute to good water infiltration and oxygen provision. Subsoil and topsoil dwellers eat their way through the soil and contribute to a good soil structure in that way. They seldom come to the surface. Earthworms benefit from an adequately moist soil and sufficient food. 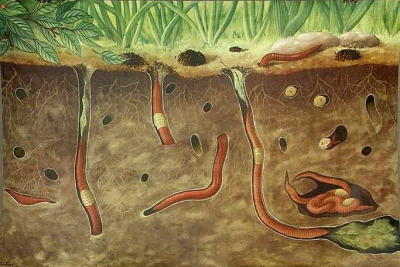